David Lott's story is proof that one person really can make a difference.

Now that is not to say that he did it alone, not by a long shot! He just made the decision to help change the world, took action and then by nature others followed. Belmont Brewing Co owner, Dave Lott, decided he wanted more purpose and meaning in his life after running his own successful business for over twenty years and sending his kids off to good colleges.

After learning about Water Underground and the horrifying reality that women and girls in rural sub-Saharan Africa from as young as 5 years old walk 6-8 hours every day to collect filthy water from stagnant ponds and rivers 3-5 miles away, Dave felt compelled to use his resources to do something. He and his wife teamed up with another couple, the Keller's, and decided to hold a 'Cocktails and Conversation' evening in May of 2017 and invited their rolodex of successful and influential friends to learn about Water Underground. Water Underground founder, Justin Arana, attended the event and presented films and images of the impact of the organization's work in Massinga District, Mozambique since it's launch in 2015. Before we knew it, in a single evening Dave had raised almost $10,000 USD in one evening.

It did not stop there. Donations continued to roll in after the event including multiple guests deciding to support monthly to keep Water Underground projects going. As of July 2017 Dave had raised $22,000 USD. The money raised funded an entire clean water project in the community of Macangane, Mozambique. Dave also went a step further and put up his own personal funds because he believed so strongly in the cause.

We invited Dave to Mozambique to experience the journey of changing an entire community's life through water. He says it was one of the most fulfilling experiences of his life.

and meaningful for so many."

Dave touched down in Mozambique on the 12th of October 2017 which would begin a two-week journey he would never forget. With a masters degree in Public Health and volunteering for organizations such as The Peace Corps, Dave was excited to see how his knowledge and life experience could come into play during his visit.

On Day 1, Dave visited the classrooms of the students (grades one through five) in the community where he was funding the Water Underground project. He was immediately confronted by how little the children had - no desks, no chairs, old plastic bags for school bags and tattered (if any) books. What could have been heartbreaking, was a gift of perspective. He noticed how happy and positive the attitudes of these children were, and the simple joys they got from the simplest things - very different to some children in the developed world who might have an iPhone from seven years old. Dave gained the most reward from playing with the children and began to be known as 'the balloon man'. Each day he would fill his pockets with balloons, blowing them up and releasing them into the air to a screaming group of 300+ children who were laughing and cheering uncontrollably. By Day 3, Dave had started to learn local language including 'kanimambo' which means 'thank you' and truly began to immerse himself in the experience.

Each day encompassed a lifetime of memories and precious moments. Community after community, Dave participated more and more with the Water Underground team and helped educate the local committees about disease prevention how to take pride and ownership in their new water well, sanitation center and garden. During his time he also participated in traditional ceremonies, the drilling process, planting crops in the school gardens and connecting with community members on a personal level.

On Day 7, the most exciting moment unfolded. After a week of drilling, water was finally reached! Dave and the WU team hurried quickly to the community (which was 1.5 hours from the main village of Massinga) and when he arrived he was overwhelmed by the electric feeling in the air - feelings of hope, joy and gratitude. After seeing Dave arrive, the local women quickly pulled him in to join with them in their celebration, dancing, singing and crying. He was a huge part of the single most memorable day in these people's lives.

On his last day in Mozambique Dave shared:

"I became more aware of the needs of the people and those in similar circumstances throughout the world. The need is huge and overwhelming, but we can all do something."

"It was very gratifying to know

that through my efforts and support from my peers,

two thousand individuals will have a better chance at life."

Dave continues to be a strong ambassador for Water Underground individually and as a member of the Rotary Club of Long Beach (who funded four additional Water Underground projects in 2017). Dave is inspiring others to get involved and leave their legacy through sustainable clean water and sanitation projects in Mozambique. He believes that by investing in the people - spending time, honoring their spirituality and rituals, learning from them, teaching them new skills, inspiring new women leaders to emerge, encouraging ownership and responsibility - true long term change and social impact can be achieved. This all requires time, hard work and dedication. "[After spending 2 weeks with the Water Underground field team] I saw for myself the difficult nature of this kind of work. It is exhausting. I have a deepened respect for the dedicated people who devote their lives to helping communities get access to the most basic of necessities - water and sanitation".

To learn more about how you can become a partner with Water Underground, and leave your legacy through the trip of a lifetime, please contact us.

THE STORY OF WATER - Newsletter issue 01

WHAT ERUPTS - A PHOTO JOURNAL 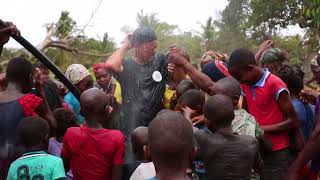 DONORS VISIT THE FIELD AND EXPERIENCE THE MAGIC THEY MADE POSSIBLE

A COMMUNITY PROJECT IN MEMORY OF JULIAN COURTNEY

THE LEGACY OF ARLENE SOLOMON AND KATY FELSENTHAL

THE STORY OF WATER - Newsletter issue 01

WHAT ERUPTS - A PHOTO JOURNAL

DONORS VISIT THE FIELD AND EXPERIENCE THE MAGIC THEY MADE POSSIBLE

A COMMUNITY PROJECT IN MEMORY OF JULIAN COURTNEY

THE LEGACY OF ARLENE SOLOMON AND KATY FELSENTHAL